At the request of neimënster, the Federation of Beekeepers has installed since 2012 several beehives in the gardens of the City of Luxembourg, along the banks of the Alzette, in the immediate vicinity of the Abbey area. The bees find there an ideal environment, sheltered from pesticides, monoculture and urban turmoil.

The pollination carried out by the bees on the territory of the city of Luxembourg is part of the green initiative of neimënster. A total of 10 beehives – one of which is used by the MNHN for educational purposes – have been installed in the Pétrusse valley, along the Alzette river. Each hive contains between 15,000 and 60,000 worker bees depending on the season and produces an average of 20 kg of honey per harvest. The nectar is harvested twice a year by the beekeeper Georges Gidt: in spring for a clearer and sweeter honey, in summer for a more amber colored and stronger tasting honey.

Mielusina
Named Mielusina, the honey from Neimënster pays tribute to the mermaid of the Alzette, which the Luxembourgish artist Will Lofy († 2021) was so fascinated by. The painter and sculptor, who lived a few steps from the neimënster site, created the illustration, a Mélusine half mermaid half bee, which decorates our pots and bottles. A honey liqueur with apple alcohol, prepared in a traditional way for neimënster, is also offered to the public. 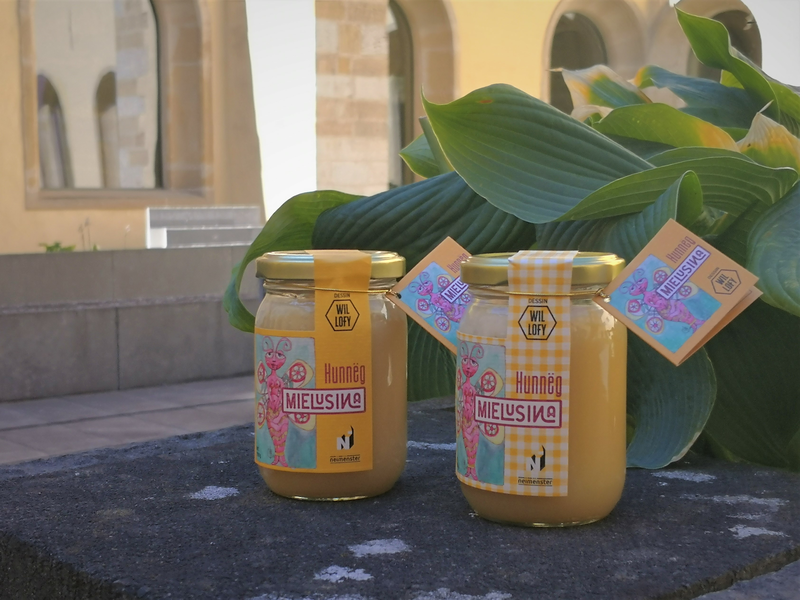