In the heart of the City of Luxembourg, on a UNESCO World Heritage Site, this unique architectural ensemble has witnessed four centuries of eventful history. Each stone has its own story to tell...

At the request of neimënster, the Federation of Beekeepers has…...

Lucien Wercollier is one of the most important Luxembourgish sculptors…...

In the heart of the city

The location of the Grund and the views it offers of the remains of the fortress and the rocks from which the upper town emerges are of exceptional value. The rocky cirque and the garden terraces underline its vertiginous ascent and serve as a backdrop for the views of the upper town. You get the feeling of a different time, the district is a pause, a breath, only a few steps away from a completely different city. 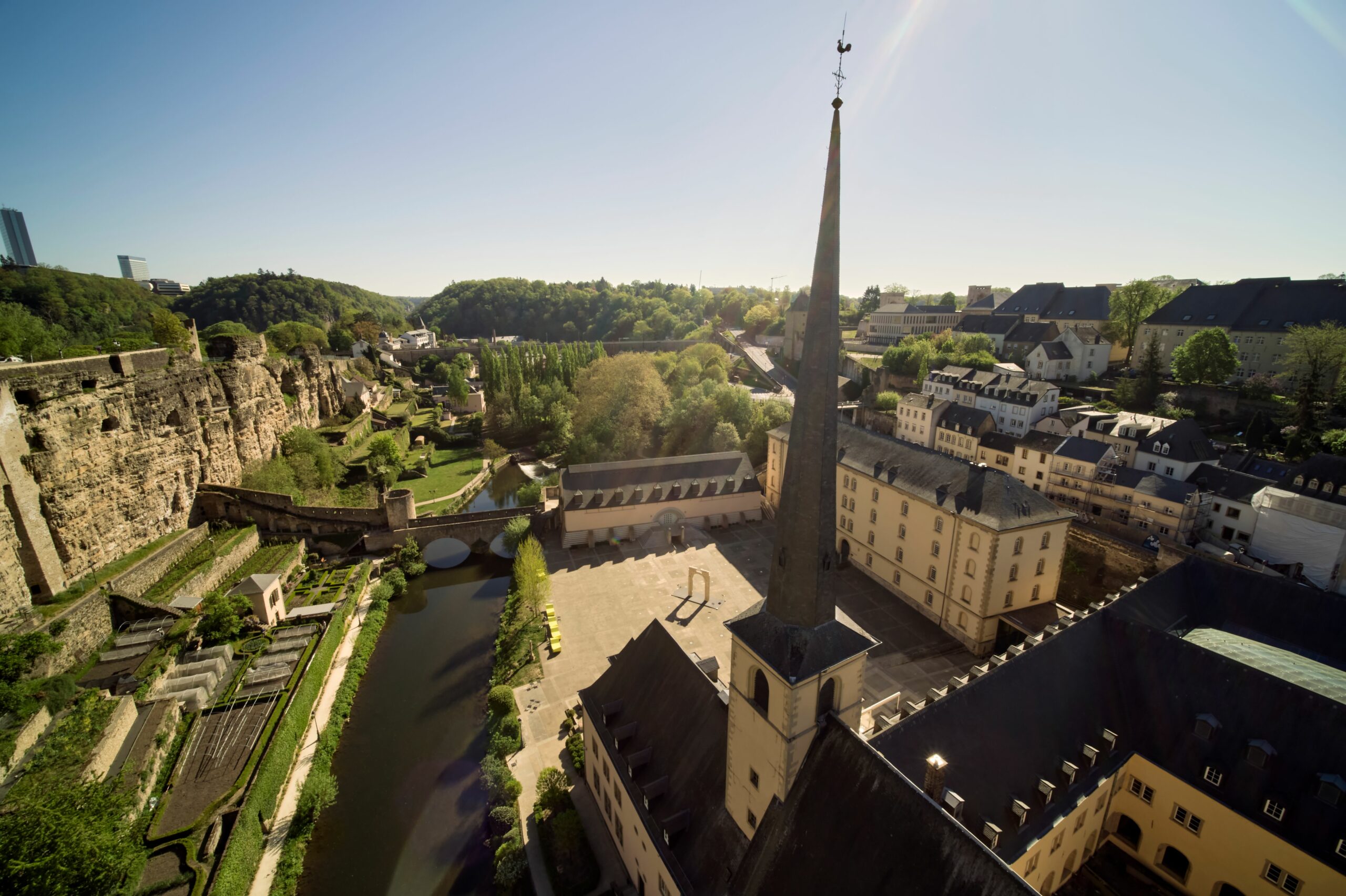 The Wenzel Itinerary takes us in just over 100 minutes through the 1000 years of history of the city of Luxembourg. It is a tour through time and space that connects the upper and lower city. Like the previous itinerary, Parks and Gardens, it starts at the “Bock” rock, goes through the Old Town, the Wenceslas wall and the Alzette valley with its extraordinary fortifications to end on the Holy Spirit plateau. Halfway along the route, while crossing the fortified walkway equipped with loopholes, the walker passes the Robert Krieps building of the Centre Culturel de Rencontre Abbaye de Neumünster and discovers some remains of the Wenceslas wall. From the terrace, through a window, you can admire the “Krudelspuert”, a former gateway to the medieval city that linked the suburbs of Grund and Clausen. This vestige gives the auditorium that houses it a testimony of the past and a singular dimension.

The walker can then visit the abbey by going to the huge square at the foot of the cliff. He then goes up by the elevator of the Robert Bruch building towards the second gate of Trier, to continue the circuit. From the terrace along the Krieps room, the visitor can also take the initial circuit by the staircase which also leads to the second gate of Trier.

The Luxembourg City Tourist Office proposes to visitors to explore the most beautiful parks and gardens in the different regions of the Grand Duchy of Luxembourg. The walker will become familiar with the genesis of the parks as well as with their particularities. Abbey and seigniorial parks, public and private, landscaped and urban are part of this unsuspected heritage. The Office National du Tourisme de Luxembourg provides a small color brochure in its offices that guides the walker along an organized circuit.

Let’s focus here on the main portion of the Itinerary established in Luxembourg city. The walk reveals a domesticated, urbanized nature, in close relationship with an environment, here urban, and in harmony with an architecture. The wild harmonies are most often skilfully composed, in perpetual movement.

The route begins with a stop on the “Bock” rock, the cradle of the capital, from which the walker enjoys a magnificent view of the imposing silhouette of the old city and the Alzette valley. From this perspective, the Church of St. John and the buildings surrounding the huge square of the Centre Culturel de Rencontre Abbaye de Neumünster take on a majestic dimension. The cloister garden of the abbey can be seen, encircled by the thick walls. An important and original stage of this walk, it invites the walker to enter the abbey to reveal its secrets. All around the Center, other spaces also celebrate nature. The old terraces along the Alzette opposite the Parvis have been redeveloped. The vegetable gardens, the vineyards and the medicinal plants have been restored to their full splendor. Nearby, on rue Plaetis, the steep slope called Op der Bleech has become an orchard and sees some 120 apple trees blossom in April. About fifteen parks and gardens, all different, with a particular history, are thus to be discovered in Luxembourg city.

The Centre Culturel de Rencontre Abbaye de Neumünster is located in the Grund district, in the heart of the old town of Luxembourg, which is a UNESCO World Heritage Site.

Immerse yourself in the fascinating history of the old town of Luxembourg and you will understand the important role the city plays in European history.